Could it be? A mere 527 years after the King’s death, archaeologists, in connection with the University of Leicester, believe they may have found Richard III’s final resting place.  Much of what we know about this king comes from information found in Sir Thomas More’s The History of Richard III which paints Richard a physically deformed tyrant and villain who murdered his own nephews to secure his crown.  These sentiments were propagated in Shakespeare’s play about the king.
Despite his poor reputation, archaeologists and scholars alike are excited by the possible discovery of his grave site.  It was only two years ago that scholars announced they had successfully identified the site of the Battle of Bosworth Field , where Richard – the last English king to die in battle – famously lost his life.  After the battle, his body was paraded through the streets of Leicester and then entombed in the Franciscan friary, the lost church of Greyfriars Church.  Finding the body had previously been thought somewhat of a lost cause as there were rumors that Richard’s bones had been moved during the Reformation and thrown into the River Soar. 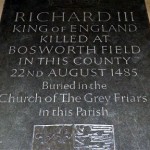 The body of an adult male was found in what is thought to be the choir of the church, which is where Richard is historically known to have been buried. The skeleton had an arrowhead lodged between the vertebrae in his upper back and appeared to have a skull injury suggesting that a bladed instrument cleaved into the back of the skull, both of which are consistent with battle injuries.  The individual also appears to have suffered from severe scoliosis, which may have resulted in one shoulder appearing higher than the other, though nothing as severe as the humpbacked character Shakespeare presented in his play.
Despite the strong evidence, archaeologists say we can’t be sure that the body is that of Richard III until several rigorous laboratory tests are preformed, including a DNA test.  The archaeologists working on this project hope we will remember that the discovery of Greyfriars Church is an important discovery even without the possible discovery of Richard III’s body, as its location was forgotten after it was dismantled during the dissolution f the monasteries under the reign of Henry VIII.
Personally, I’m very excited by this find and I can’t wait to hear back when the laboratory testing is complete.  If it is him, this is a pretty huge find, and the implications could be monumental, but even if it isn’t him it’s really great to see history (especially Plantagenet history!) being discussed in the news.  Not to mention, the news gave Denise, Melissa and I the kick in the rear necessary to begin updating this blog with a little more regularity (we hope so, at least).
As always we are eager to hear from our readers. What do you think? Is it really Richard III or is it just wishful thinking? Leave a comment and let us know! Profound insights, idle speculation and whack-a-doo conspiracy theories are all welcome.