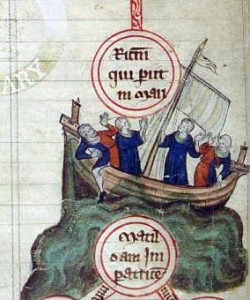 What did the sinking of The White Ship in 1120 have to do with the ascendance of the Plantagenets to the English throne in 1154?
Let’s start in 1120.  Henry I, William the Conqueror’s son, is on the English throne.  Though he has many illegitimate children, he has only one legitimate male heir – William the Aethling.
In his late teens, William has already proven himself to be an able warrior and capable successor to his father.  He has just been acknowledged by the defeated Louis VI of France as his father’s heir to Normandy and his peaceful succession to England seems assured.
Then, on November 25, 1120, William steps aboard The White Ship for its maiden voyage across the channel from Barfleur to England.
Charismatic, William travels with a sort of junior court including Richard, Earl of Chester and his Countess and heirs to most of the great estates in England and Normandy.  Among his companions that night are also his half-siblings Richard and Matilda, Countess of Perche and his cousin Matilda of Blois.
The White Ship was a technological marvel of it’s time.  Beautifully  fashioned in the Viking style, it boasted a single mast and 50 oarsmen.  That night it carried about 300 of England’s best and brightest – 180 knights,18 noblewomen and the royal heir and his company.
What exactly happened to The White Ship is uncertain.  It appears that the mood aboard the ship was so festive that things got out of hand and that no one, not even the ship’s master and crew remained sober.  By the time they left port, sailing into a challenging harbor with rocks and shifting tides, they were well behind the rest of the fleet.
Did the ship’s master pilot the ship too close to rocks because he was drunk or was he simply trying to make up time?  We’ll never know for certain.
What we do know is that the ship hit a rock which tore a hole in it’s hull, only 1/2 mile from land.  The prince’s bodyguards got him into a small vessel and away from the wreck, but then William demanded that they return for his sister, whose cries they could hear.  As they neared the wreckage, the craft was overwhelmed by panicked people in the water and went under.
The only survivor of The White Ship was a Rouen butcher who held onto the mast until he was rescued by fishermen the following morning.
More was lost with the sinking of The White Ship than Henry’s heir and his company.  The impact of the tragedy would stretch across more than thirty years as English succession went from uncertain to untenable.
Rather than choosing an heir from among his nephews Henry forced his nobles to acknowledge his only remaining legitimate child, his daughter, Matilda, as his heir.  His attempts to secure the succession by forcing Matilda to marry Geoffrey of Anjou further alienated his nobles.  England was not yet ready for a woman to rule in her own right, particularly one with an Angevin husband.
Upon Henry’s death in 1134, many of his nobles defected to his nephew, Stephen of Blois.  Unwilling to abandon her inheritance, Matilda retaliated and civil war and anarchy were the result. 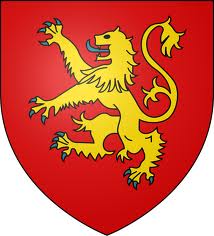 Shifting alliances prolonged the conflict and it was not until 1153 that the Treaty of Wallingford gave the people of England any hope for the peace and stability.  The treaty named Henry, Geoffrey and Matilda’s eldest son, Stephen’s heir.  When Stephen died in October of 1154, Henry’s ascension was uncontested.
On December 19, 1154, Henry II was crowned at Westminster, becoming the first Plantagenet king of England.