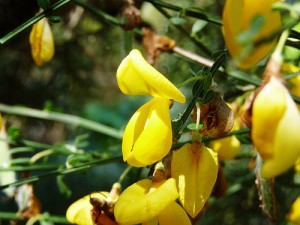 From the way we bandy the Plantagenet name about, you could be forgiven for thinking that all the kings of England from 1154 through 1485 proudly called themselves Plantagenet after their ancestor Geoffrey V, Count of Anjou (sometimes called Geoffrey le Bel or Plantagenest) but you’d be wrong.
According to William Camden the Plantagenet name originated with Geoffrey’s habit of wearing a “broom-stalk in his bonnet.”  The Latin name for the common broom is planta genista. Voi la – the origins of the name. Not so fast. William Camden wrote in 1605, more than 450 years after Geoffrey’s death. So is that really where the Plantagenet name got it’s start?
The Encyclopedia Britanica suggests that Geoffrey was actually so nicknamed because of his habit of planting broom to improve his hunting covers. On the other hand the Complete Peerage dismisses the hunting explanation, saying that Planta Genest was inserted into reference poetry to create a rhyme rather than to provide any explanation for his name.
Whatever the true explanation, we know it didn’t stick to the family. Geoffrey’s son, Henry II called himself Henry Fitz-Empress after his mother, the Empress Matilda and legitimate daughter of Henry I. He was alternatively known as Henry “Curtmantle.” Two of Henry’s sons followed him to the throne, Richard I “the Lionheart” and John “Lackland.”
John’s son, Henry of Winchester would rule as Henry III upon the death of his father. Henry was to be followed by Edward I, arguably one of the greatest Plantagenet kings, who was nicknamed “Longshanks.” He was, in turn, succeeded by his son Edward II or Edward of Caernarfon. Edward III, formerly known as Edward of Windsor followed Edward II, dying in 1376, fully 225 years after the death of Geoffrey of Anjou.
During this time, surnames became common, but never were any of these kings referred to as Plantagenet in their lifetimes. In fact the first historical reference we have to anyone using it as a surname was in 1460 when Richard, Duke of York claimed the English throne as Richard Plantaginet.
With all of these interesting names to choose from, why, after hundreds of years would he choose as his surname the nickname of a long dead ancestor who had never worn a crown? A man who, though he fought and won Normandy, had never stepped foot in England?
The answer may lie in the unique shades of meaning the name acquired during those centuries of transition. In Geoffrey’s time, the name could have suggested the three powers of the vegetable soul – nutrition, augmentation and generation. Later, Richard of York, locked in a life or death struggle with Margaret of Anjou and her ineffectual husband, Henry VI, would have been happy to be associated with these traits.
But in the twelfth century, the name could also have a bawdy, almost prurient sense. Planta meant “to beget” or to procreate in Welsh. When combined with genet (a small Spanish horse), it suggested bestiality. Similar names evolved during the period. They included Plantefolie, which may have meant “lewd shoot” or “planter of wickedness” and Planterose or “orifice planter.”
Generally the connotation was negative, at least early on. But over time planta gathered more spiritual attributes. In a time when the king was mentally fragile, if not insane and had only one child, begetting could be a virtue.
Richard of York had four sons, the eldest of whom was Edward, Earl of March. Tall and golden, the man who would become Edward IV would have been an attractive alternative to the young Prince of Wales. Richard may have wanted to emphasize his ability to sire strong, healthy (sane) sons as well his legitimate connection to hundreds of years of English kings, including the man who had fathered the legitimate son of the legitimate heir of Henry I.
Richard may also have wanted to highlight Henry VI’s inability to capitalize on the gains made by his father on the continent. Because of his father’s military prowess, Henry VI had actually been crowned king of France in his infancy, only to lose France to his maternal uncle, Charles VII of France. In contrast, Geoffrey Planta Genest had won Normandy with his sword, securing his son’s maternal inheritance.
We have no definitive answers, only tantalizing clues about the Plantagenet name. What we know is that no matter what it originally meant and then came to mean, it didn’t serve the man who first used it as his surname. Richard of York was killed in conflicts over the English crown before he could ever rule. But the name stuck to his descendants and, retrospectively, came to describe an entire dynasty.